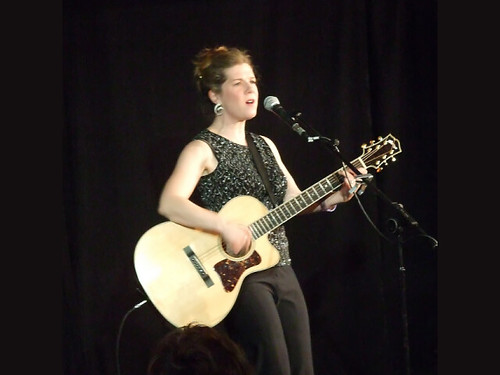 Last night Jim and I went to see Dar Williams perform at The Tower Theatre here in Bend.

Damn – she is amazing. If you get a chance, go see Dar. Anywhere you can.

While it's the first time I've seen her on stage, I get the strong impression that no matter where she performs, it feels like you are in a 30-seat coffeehouse and she's singing just for you and your friends. That's a gift, she's got – a big bonus to the crazy-good voice and storytelling she does in her music.

Many little things made me think of the parallels between performing music and public-speaking, between my occasional tears, raucous laughter and total absorption in the music. The one that stood out the most is when Dar just completely forgot the lyrics to the song she was singing.

As is always the case, I had a moment of panic, on her behalf. This is good to note in all presenting/performing: NO ONE wants you to fail, mess up, or fall apart (okay, I suppose there are those wack-jobs out there whose self-esteem thrives on that kind of horror, but they are very, very rare – and they don't matter, really, anyway.)

My point is: I needed Dar to pull it together fast so I did not get more uncomfortable. My overall pleasure at the show really depended on that.

She handled it beautifully.

Three specific things she did during the show and at the time of the forgotten-lyrics-situation made the situation a non-issue – and possibly even added to the overall great feeling of the experience for me as an audience member. These things can serve you well in your public-speaking, too, if you ever find yourself in the difficult situation of forgotten information or other on-stage struggles. Here they are:

Create genuine connection with your audience, from the very beginning. From the start of the show, Dar told these riveting backstories on the songs she was about to sing. She was both self-deprecating and brilliant in detail and description. Very early on, I was absolutely certain that Dar and I would be fabulous friends. I felt I knew her – and I wanted good things for her. So, when things went a little awry, my heart was on her side, willing the words to come back to her.

Own up to the situation with grand confidence. It was surprising when Dar stopped, mid-song, hand to head, and said “Oh no! I've forgotten…” – but she was laughing, and her posture and facial expression said, “But don't worry, I'll get it…” She continued to strum along, commentary flowing… then she said something like, “I'm sorry, I hope you don't take this the wrong way…. but, well, better you than at the wedding… ” Since she had been sharing about her life so much to that point, we all knew she was playing at her college best friend's wedding in a few days. Instead of feeling like a “low blow”, it was a beautiful way to dissipate the tension and remind us all of our shared history (if but only for the last hour) and connection. She picked back up playing quickly and took that song on with the same confidence as all the others. Which leads me to the final and critically important part…

Move on. We'll be okay if you're okay. So get okay as soon as possible. Dar made one more comment, as she began to sing the next song (a beautiful song, written about her husband), reassuring us, “I've got a much better handle on this one…” After that, the show went on just as before – mesmerizing storytelling in both song and monologue. I could have listened for at least another hour. And I don't often feel that way after two hours of doing anything.

Sometime I'll tell you about the time I forgot my lines on a stage in San Francisco. I didn't handle it nearly as gorgeously as Dar Williams, but I learned a lot about just how much the audience wants you to succeed. If you do the things Dar did above, you will both get past the angst of your own blipped moment and you'll make a very cool impression on your audience. Meantime, go get yourself some Dar!

Thanks Dunkv, for the way better Dar shot than I was able to get on my iPhone at last night's concert.