Ep 105: Taking a Stand for Friendship in Business with Shasta Nelson

Ep 105: Taking a Stand for Friendship in Business with Shasta Nelson 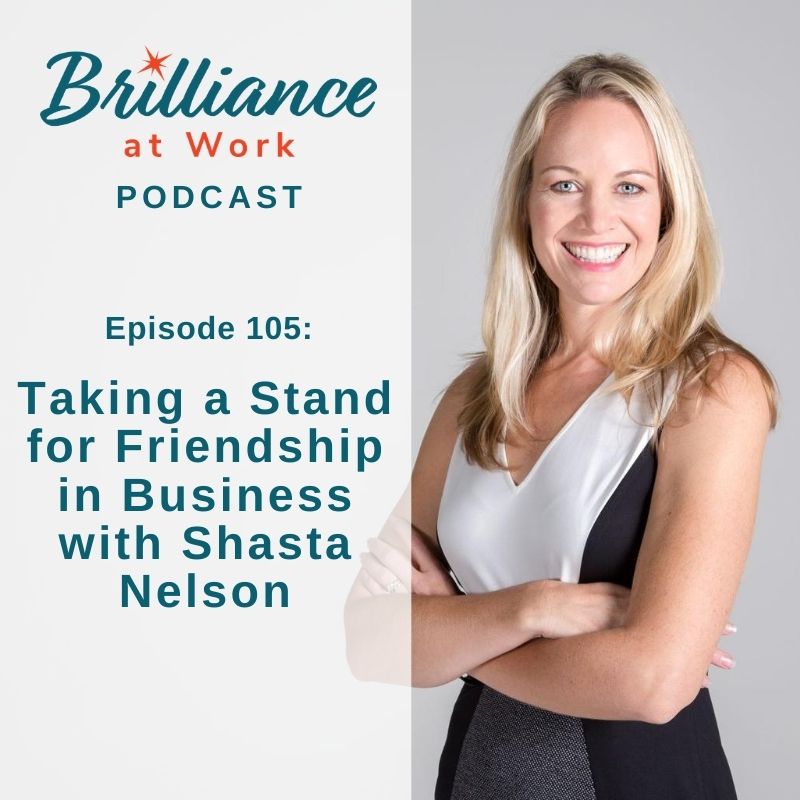 Not only is Shasta Nelson a great example of an excellent thought leader, her insights around connection and friendship in business really can change your experience of life and work overall.

In this episode, Shasta shares the story of how she became an expert in friendship, largely because it was a deeply important topic with very little research and resources available. You’ll also learn the simple, yet profoundly valuable model for creating friendships that are fulfilling, wherever the relationship originates. This conversation is invaluable for corporate businesses—especially during these strange times of unprecedented working from home where friendship in business is more important than ever before.

Frequently featured in the media as a popular resource on healthy relationships and the increasing epidemic of loneliness, Shasta has been interviewed live on several television shows including Katie Couric’s Katie, Fox Business, The Early Show, The Today Show, and The Steve Harvey Show. She has also been featured in countless national magazines like Good Housekeeping, Real Simple, and Health; and interviewed for prominent newspapers like The New York Times, The Washington Post, and the Los Angeles Times.

Shasta was selected by Facebook to be their media spokesperson and friendship expert for Friends Day 2018.

Shasta’s third book The Business of Friendship: Making the Most of the Relationships Where We Spend Most of Our Time will be published by HarperCollins Leadership in the summer of 2020.

Her Three Relationship Requirements have been featured in her popular TEDx talk and are widely praised for helping break down relationships in ways everyone understands.

Featured On The Show:

Listen to the Full “Friendship in Business” Episode:

PREVIOUS EPISODE | Ep #104: The Biggest Barrier to Your Greatest Impact